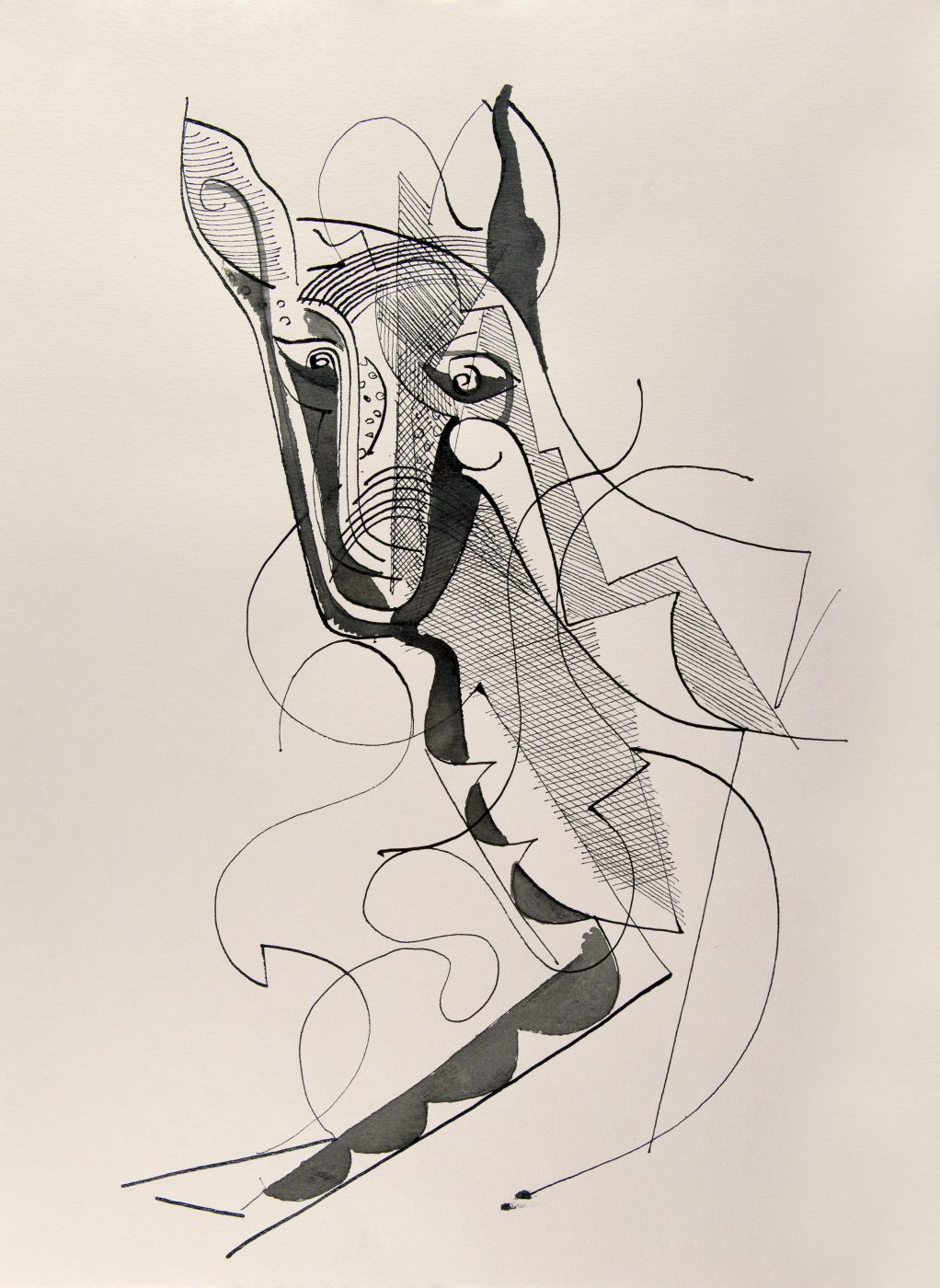 With this exhibition entitled “All Friends” presented for the first time at FLAIR Galerie, Baltasar Dürrbach  assembles a rich bestiary, in a score of Indian ink drawings and three paintings. Both for the animals he encounters in his everyday environment, like the donkey, the rooster and the dog, and other more exotic specimens like the elephant, the rhinoceros and the giraffe, each translates the inner state of the artist at the precise moment when he indulges his artistic bent.

Born in Provence in 1962, under the dual sign of Capricorn and the Buffalo, Baltasar Dürrbach is an earthling entirely impregnated by culture. For him, cultivating the soil or cultivating his mind exemplifies the same passion. Raised in the world of Cubism with artist parents who were close associates of Pablo Picasso and Albert Gleizes, nurtured on the tales of Jean Giono, who glorified the peasant world in his prose, our gentleman farmer spends half of his time cultivating his garden, and the other half painting and, especially, drawing.

This scion of high culture in biological communion with nature, passed his youth observing his father, the painter and sculptor René Dürrbach, and acquired his drawing and painting skills in the studio of his tapestry making mother, who had been commissioned by Picasso to transcribe a selection of the master’s paintings into tapestry. As his older brother became one of the region’s foremost vintners, Baltasar dabbled briefly in oenology, finally trading the study of wine for the intensive practice of art in a farm setting.
He threw himself into easel painting and endeavored occasionally to set his colors aflame, but as a rule, simply let his hand run across the paper, intuitively depicting his fauna and flora in an inspired material minimalism.

A white page, a pen and black ink were sufficient to create a world where color only intervenes to punctuate a line, to stress a rhythm, to highlight a detail of the composition.
While Cubism is implicit in his work through Picasso, Gleizes and Delaunay, it is tinged with an abstraction and a spirituality dear to Kandinsky, and yet enjoys the intuitive freedom of the Surrealists. Yet appearances can be misleading, and the impulsive naturalism that Baltasar Dürrbach stages for our delectation is solidly anchored in an authentic 100% organic present.

To get there, Baltasar Dürrbach works in a monk-like seclusion, without preconceptions, guided willy-nilly to wonderment, line by line, by what he sees emerging on the white page. Landscapes, and also people, each stranger than the other, surge from his works.

The exhibition “All Friends” depicts a strange but familiar world in which all animals have their place, and reminds us that man, too, is an animal.